Thoughts on Holidays and Their Meaning in My Fiction

It's the beginning of the holiday season! 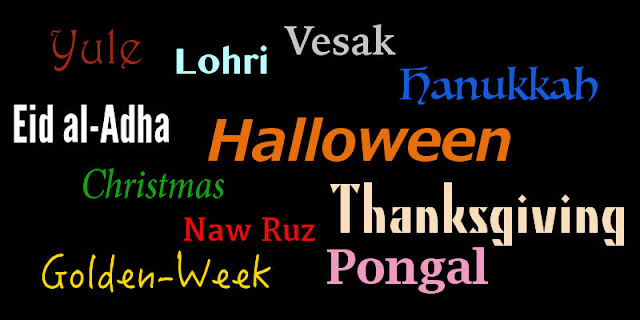 My calendar is stuffed at this time of year by holidays. My husband's early October birthday, Canadian Thanksgiving (due to my Quebecoise heritage and the fact that every year should contain at least two Thanksgivings), Halloween, American Thanksgiving, Winter Solstice, Christmas and New Year's Eve/Day. Whew! Festivals are squished in there at the end of the calendar for us.

First of all, end-of-year sounds either correct or ridiculous weather-wise, depending upon where in the world you are. I grew up in Maine, where there's about 1.5 months of hot weather. The rest of the time it's either cool or downright frigid.

In my 20's, I moved to Southern California, where—to my shock—I found out that even Thanksgiving Day is not immune to 90F heat and blazing sunshine.

This put a big dampener in my excitement over the holiday season for the first few years after my move. A Thanksgiving without sweaters? A Christmas without a blizzard? Wha—

And then I thought of other people the world over. Things like Christmas or Hanukkah are date dependent, meaning that if people celebrate these days, they'll have totally different experiences if they live in, say, Sao Paulo or Adelaide than they would in Portland, ME or Reykjavik.

Now, this bias of my childhood was reinforced by the TV/film media, who always portray the holiday season as full of hot chocolate and mittens. This realization would probably not have taken someone living in Palm Beach so long, haha.

Then, as I became more intrigued by different celebrations, I learned that many cultures start their calendars in different seasons. Spring is a popular time to start the new year, as everything is renewing itself.

All this doesn't even touch on the fact that there are also many cultures that have completely different calendars, some going by the lunar calendar. My fantasy WIP main character comes from such a culture, and she has trouble with the solar calendar because of this.

This entire holiday realization didn't end there. Although I had been a storyteller and writer my entire life, it wasn't until my 20's that I truly became serious at my craft. All my research on holidays began to percolate in my brain, and what came out was a realization about the festival need in all cultures. Even the most stoic people need some sort of gathering, sharing, food-centric festival. This need seems to cross all borders. Any civilization or world I made up would need to include that human trait in it, or the world itself would feel hollow.

The fact is, though, that those calendar-centric holidays like American Thanksgiving and New Year's Day are artificial when transported to different locations. The real celebrations germinate from what the actual climate, food sources, religious affiliations and temperament of the culture are at the place where the holiday is being celebrated.

I love to make my own worlds as natural and as believable as they can be. One of the biggest ways is to invest them with their own natural rhythms. This is, to me, one of the best ways of sharing my own love of the strange, wonderful and expansive SF/F world with my readers.
Posted by Unknown at 9:40 AM 4 comments: